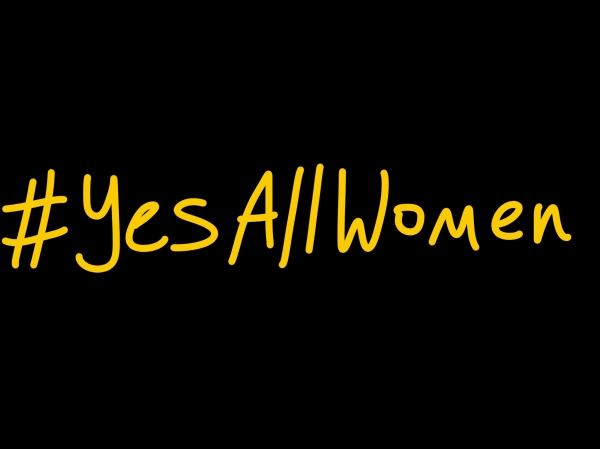 Following Elliot Rodger’s hate crime against women (yes, I know many news reports seem to have missed the misogynistic message he was sending, I know Wikipedia has decided to classify it as generic violence instead of violence against women, and I know The Good Men Project has decided it was really all about virginity, but make no mistake, it was a hate crime nonetheless), women all over the internet rose up with the hashtag #YesAllWomen, sharing stories of misogyny and sexual violence, pointing out how the little and not-so-little experiences that women are subjected to on a regular basis combine to create a society in which a killer like Rodger is made.

Somewhat predictably, there has been resistance from men reluctant to acknowledge the sexist culture that surrounds us; more specifically, they are uncomfortable with the idea that they, with their ‘harmless banter’ or only slightly sexist behaviour, could be complicit in a hate crime of such immense proportions.

One example of this is this piece by T.J Holmes, who believes that the hashtag is unfairly placing blame on men who consider themselves good men, who have never attacked women and probably never will, who are only guilty of what he sees as innocuous sexist behaviours, such as giving a woman their arm, or getting women to pass through doors before themselves. He states that “there is a huge gap between the man who catcalls a woman walking down the street and the man who opens fire on her”, and that #YesAllWomen has somehow led to a confused population of women who are unable to see the distinction between these two actions.

Yet, as someone who has followed the hashtag quite closely over the last week, I see no evidence of this “sense that all sexism is created equal”. There is nothing on the hashtag to suggest that shooting a woman is just the same as whistling at her on the street. What I have seen though, over and over again, is women asserting that we must connect the everyday sexism and harassment that women experience, with the underlying attitude of male entitlement to female bodies, thereby creating the conditions necessary for Rodger’s hatred of women to take root and flourish in that particular way. I have seen women point out how charged with fear many romantic / sexual interactions are for women, where it is often hard to tell if rejecting a man’s advances will lead to an uneventful evening, or an encounter with violence. I have seen women unite in their common experiences of being women in a man’s world, and call on men to take the responsibility of tackling the misogyny rampant in socialised masculinity. Nowhere have I witnessed the notion that a man who has regressive beliefs about being a “gentleman” is exactly the same as a mass murderer, which makes Holmes’ opening lines puzzling, to say the least.

And let’s not forget that we live in a world where women are brought up to expect and get over unwanted touching in bars and clubs, a world where a woman’s clothing and behaviour can be blamed for her rape, and where an unambiguously woman-hating killer is called a ‘madman’ rather than an extremist in a misogynistic society. Given this background, can you imagine that from now on, due to #YesAllWomen, any man who engages in sexist behaviour will be viewed and treated as no better than a mass murderer? Of course not. The idea that this is a serious concern for men is patently ludicrous.

I’m not surprised that many men are feeling uncomfortable after reading tweets on the #YesAllWomen hashtag. If one has lived one’s life completely oblivious to the systemic sexism that pervades everything we do, it can be a shock to suddenly realise that you, a well-meaning, kind-hearted man who would never hurt a fly, are complicit in a culture that has led to horrific instances of male violence against women. In fact, I’m glad of this discomfort. I would find it much more worrying if all men read about the harassment, fear and violence that women experience, and felt absolutely nothing. But don’t pretend that this discomfort is in anyway comparable to the actual lived reality of women’s oppression. Don’t ask women to censor their words and hide the truth because it makes some men feel unfairly blamed. Recognise how tiny sexist acts, while so seemingly harmless to you, can add up and add up and add up, to a culture where women are assigned inferior status, and hate crimes against women are a dime a dozen. Then take that discomfort and use it to drive change, rather than taking the easy path of denial.

100 thoughts on “On #YesAllWomen, and the Discomfort of ‘Good Men’”