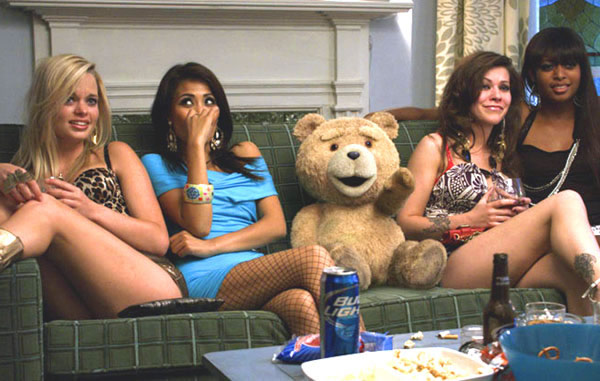 I wanted to like Ted. Although I had problems with both Family Guy and American Dad, the story arcs of Stewie/Brian and Roger were often funny, and didn’t always rely on offensive material. Being a talking teddy bear, I thought Ted would fit into the same mould.

Sadly, much of Ted’s humour stemmed from his being one of the most obnoxious non-villain characters I’ve seen on screen. He is the ultimate lad’s lad – doing drugs, sexually harassing women, surrounding himself with prostitutes, spewing racist tripe, and being quick to point out that he is totally not gay. All of which, of course, is supposed to be hilarious.

Film critic Jonathan Kim says in the Huffington Post, “It’s a film filled with the kind of jokes you might make with your closest friends, where you can say the most offensive things you want to get a laugh since your friends know you and your intent well enough not to take anything you say to heart.” Well, I’m not sure what kind of friends Jonathan has, but my friends and I certainly don’t find such things funny. No, not even in private. Not even if we ‘know we don’t really mean it.’

The whole idea of how it’s fine to make jokes at the expense of minority groups, because everyone knows you’re not really sexist, or racist, or homophobic, is a common fallacy.

In Quirkology, Professor Richard Wiseman’s book on psychology, he investigates the world of laughter by conducting a wide-ranging experiment as to the kind of jokes people find funny. He found that “the top jokes had one thing in common – they create a sense of superiority in the reader…in each case it is about one group of people trying to make themselves feel good at the expense of another.” He also goes on to say:

“Some research suggests that jokes like these can have surprisingly serious consequences. In 1977, psychologist Gregory Maio from Cardiff University of Wales and his colleagues looked at the effect that reading superiority jokes had on people’s perception of those who were the butt of the jokes. The study was carried out in Canada, and so centered around the group who was frequently portrayed as stupid by Canadians, namely Newfoundlanders (or ‘Newfies’). Before the experiment, participants were randomly assigned to one of two groups. The people in each group were asked to read one of two sets of jokes into a tape recorder, supposedly to help determine the qualities that make a voice sound funny or unfunny. Those in one group read jokes that did not involve laughing at Newfies (such as Seinfeld material), whilst the other read Newfie put-down humour. Afterwards, everyone was asked to indicate their thoughts about the personality traits of Newfoundlanders. Those who had just read out the Newfie jokes rated Newfoundlanders as significantly more inept, foolish, dim-witted, and slow, than those who had delivered the Seinfeld material.”

“Just as worrying, other work has revealed that superiority jokes have a surprisingly dramatic effect on how people see themselves. Professor Jens Förster, from the International University Bremen in Germany, recently tested the intelligence of eighty women of varying hair colour. Half of them were asked to read jokes in which blondes appeared stupid. Then all participants took an intelligence test. The blonde women who had read the jokes obtained significantly lower scores on the IQ test than their blonde counterparts in the control condition, suggesting that jokes have the power to affect people’s confidence and behaviour, and so actually create a world in which the stereotypes depicted in the jokes become a reality.”

So is Ted, as Jonathan Kim opines, “a breath of fresh air,” or does it merely trot out the same old tired stereotypes and brand of humour that has honestly gone completely stale? In a world where sexism, racism and homophobia are thriving – the very things MacFarlane’s jokes depend on – do we really believe that all “viewers are smart enough to know that they’re just jokes”?

Being obnoxious doesn’t make you cute or funny, Ted…even if you are a bear.

21 thoughts on “Ted, and the Fallacy of ‘Harmless Jokes’”