Since writing this post about The Kissing Sailor, its reach has completely exceeded all my expectations, and has generated more discussion on my blog than ever before. As I read the comments though, I come across a couple of misunderstandings, and though many excellent people have responded with clarification, I see the same misconceptions popping up again and again.

So I thought I’d clear up some confusion once and for all. Here are some of the most common misconceptions.

Misconception #1: That kiss happened in a different time! How can you judge him using modern values?

The purpose of my original post was not to demonize George or to recommend that he be packed off to prison. A user on Reddit called MBlume gave a succinct response to someone who had Misconception #1. I’ll post it here:

“You’re…completely missing the point. The point isn’t that it happened. The point is that there’s three modern articles discussing the picture, all of which basically quote the woman in the picture as stating that it was sexual assault, and in none of the articles does the editorial voice acknowledge that that’s fucked up.”

This is spot on. Thanks, MBlume.

Misconception #2: Greta herself doesn’t call it a violation and actually seems alright with it. So your argument is invalid.

Indeed, in an interview given to Patricia Redmond, Greta does not seem traumatised by the kiss, and describes the fame that resulted from the photo in a positive manner.

However, I do think it’s worth taking into account that, even in today’s society, there is a lot of pressure on women to smile and get along, to ‘let boys be boys,’ to accept unwanted sexual contact like groping or kissing, and not to make a big deal out of it. Many of the comments have confirmed this, with gems like, “It’s just a kiss, get over it,” and how women should “stop whining” about such matters. In Greta’s case, the pressure would undoubtedly be much higher.

But one thing Greta consistently asserts is that the kiss was sudden, that she was grabbed before she even became aware of his presence. Her remarks about his strength and “vice grip [sic]” don’t sound like the words of someone who had enjoyed the kiss. The fact is, consent was not given, and her feelings about it afterwards don’t change the nature of what George did. To give an extreme example, if you were to kidnap and torture someone, only to find out later that you’d just fulfilled their deepest fantasy, does that make you less culpable?

Misconception #3: The picture on your site is not the original photo. What’s going on? Is this a trick?

Well no, it’s not a trick. Alfred Eisenstaedt, the photographer, took a couple of shots over a 10 second period, in various stages of the kiss. In one of the comments isalu507 provided some links, showing the photos in chronological order: 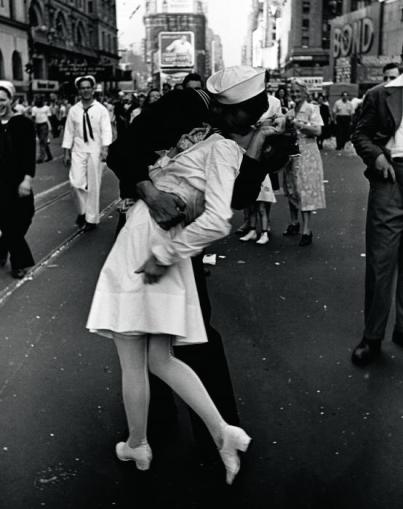 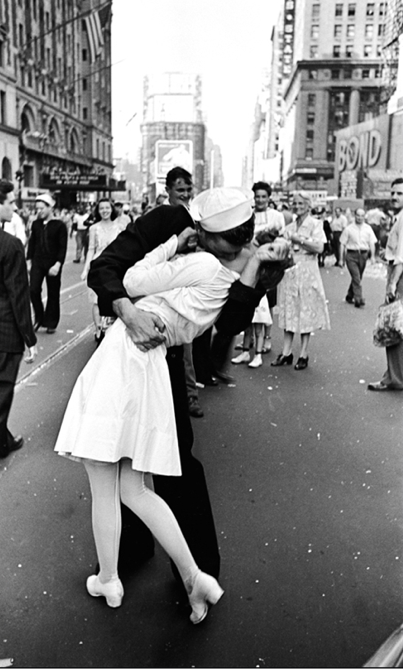 As isalu507 points out, the third picture shows Greta further on in the kiss, with her left hand clenched in a fist up against George’s face, seemingly pushing him away. I had never seen that photo before, and found it really interesting.

(edit: commenter ‘timd’ has provided some links showing that this is in fact the first photo of the series, not the last)

Misconception #4: People celebrated this photo as an icon; for a long time no one knew the story behind it. So how can you say that our celebrating it was a result of rape culture?

I’m not saying that at all. Most people believed that it was a picture of a couple, expressing their joy after the war. I don’t blame them. What I was referring to when I spoke of rape culture was the silence on the part of the news articles on the subject of Greta’s non-consent, even while publishing quotes from her which make it clear that George had simply grabbed her. This ignoring of inconvenient truths in favour of maintaining the illusion of romance is symptomatic of rape culture.

Misconception #5: Rape culture? The sailor never raped her. We shouldn’t compare this to rape, since that diminishes the experience of actual rape victims.

I think there are two misconceptions embedded in this. Firstly, just because George hadn’t raped Greta doesn’t mean it’s no big deal, nor does calling it out as sexual assault diminish the experience of rape victims. Yes, there are different levels of every crime, and no one is trying to say that the experience is the same across the entire spectrum of sexual assault. But they do stem from the same culture, and just because there are greater evils does not mean we should just ignore the lesser ones.

Also, many seem to be confused as to what is meant by the term ‘rape culture’. Our living in a rape culture doesn’t mean that everyone thinks rape is fantastic. What it does mean is a culture where rape and other forms of sexual violence are normalised, to be expected. It’s a culture where attitudes towards women’s bodies and attitudes towards perpetrators combine to tolerate and condone sexual violence, even while we pay lip service to the monstrosity of rape. It’s a culture where victims are criticised for their choice of clothing, their behaviour, and their sexual freedom, as though they are partly to blame for their fate. It’s a culture where women’s bodies are public property; they undergo scrutiny in the media, and weight gain in female celebrities like Christina Aguilera or Lady Gaga seems like a justification to hurl abuse at them. And the fact that Greta’s comments were given no attention in the news articles is certainly a manifestation of rape culture, contributing to and reflecting it.

I’m sorry that the term ‘rape culture’ makes people uncomfortable. But perhaps it’s time we stopped being comfortable. After all, it is when we start to acknowledge that society isn’t as perfect as we thought it was, that progress can be made.