With Halloween just around the corner, the time has come to navigate the minefield that is choosing a costume. Dressing up for Halloween can be fun, but it has, to some extent, morphed from being a scarefest into a hotbed for casual racism and sexism. Here are three issues surrounding Halloween costumes which bother me.

Dressing up as a racial stereotype 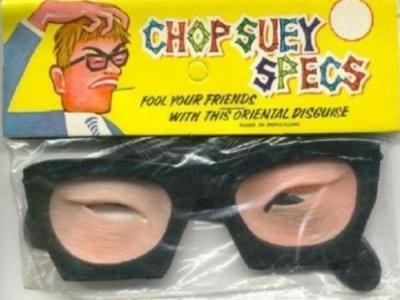 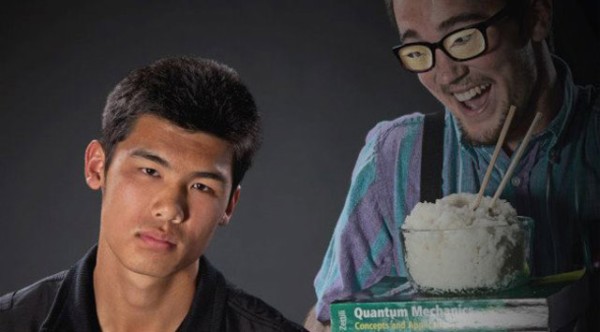 I’m actually astounded that some people think of these as legitimate Halloween costumes. White people dressing up as Asian geishas, African-American pimps, Arab terrorists, and so on, is rude and downright offensive. It shows a complete lack of understanding of the lived reality of the lives of non-white people, and an insensitivity to the way our lives are negatively affected by the very stereotypes being perpetuated for the sake of a few laughs. It contributes to the othering and marginalisation of racial minorities by portraying us as a separate species, to be parodied and summed up by one outfit, stripped of individual differences.

A group of students from Ohio University called “Students Teaching About Racism in Society” (STARS) have started a campaign against such costumes. Their posters are very powerful, and have gained lots of publicity:

(all pictures are from STARS) 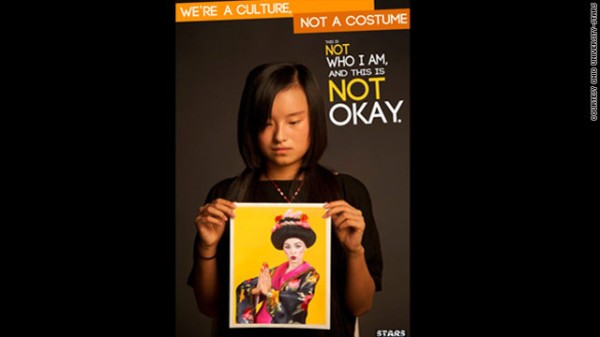 How to avoid this: Easy – steer clear of racial costumes.

Men dressing up as ‘sexy’ or ‘ugly’ women for a joke

Sadly, this doesn’t happen only on Halloween. In the UK, a skirt, wig, high heels, fake boobs and make up is an oh-so-funny get-up for male university students, whenever a costume is required. The hilarity depends on the indignity that we perceive to be inherent in a man dressing as a woman, and the more sexualised the costume, the funnier it is supposed to be. Or they sometimes just turn to mocking women who don’t conform to patriarchal ideals of beauty; that works for them too:

I must be clear that I am not referring to trans women here, or men who like to cross-dress occasionally. I am talking about the outfits that you see in the pictures above, and others like them, that are clearly meant to be ridiculous, and to elicit guffaws from all their lad friends.

How to avoid this: If you’re a man genuinely wishing to dress up as a female character, (and make sure it is a female character, not just ‘Woman’,) do it in all seriousness, and spend the night urging others to critically analyze why they might find it funny. Otherwise, just stick to vampire/monster/skeleton.

The epidemic of sexy female costumes

Have a browse through some Halloween costumes online, or take a trip to your nearest costume shop. Then see how spot-on this cartoon is: 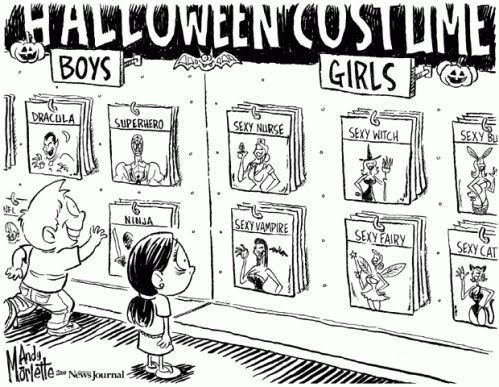 A man’s costume can be scary, funny, weird or disgusting, but God forbid a woman be anything but sexy! I’ve seen this framed as simply a Halloween issue, and indeed I’m writing about it in the context of Halloween costumes, but the problem extends much further than that. Moving away from the realm of costumes, we see this phenomenon in every aspect of our lives. It isn’t enough for a woman to be a world-class athlete, a comedian, a CEO, or a politician, she must never forget her duty to appear attractive at all times. This is why it makes sense for media outlets to report on the figure of Marissa Mayer, the CEO of Yahoo; for people to mock Olympic gold-medallist Leisel Jones for being ‘fat’; for hecklers to insult Hillary Clinton’s appearance. Last time I checked, physical attractiveness was not a competency required to be a successful athlete, CEO or Secretary of State. Unless, of course, you’re a woman in a patriarchy. Then it’s always required.

Solution: If, like me, you’re tired of the mandate to be constantly sexualised, focus on being scary or funny this Halloween. Non-sexualised costumes for women are few and far between, but they do exist, together with unisex costumes that are pretty ace. Or if you’re feeling creative, DIY is a great way to go.

29 thoughts on “Avoiding the Pitfalls of Halloween”