Red poppies are everywhere. For the past few weeks, in tube stations and the streets,  you could buy a little red paper poppy to pin on your jacket, to show your respect for the nation’s fallen soldiers in the lead up to Remembrance Day. Today, led by the Queen, politicians laid wreaths at the Cenotaph to honour the soldiers who had died in conflict, while the country observed two minutes of silence.

It’s all very solemn and respectful, but dig a little deeper, and the stench of their hypocrisy rises to the surface.

Here’s David Cameron, proudly wearing his poppy and ‘connecting’ with the Royal Marines. “We must remember forever, not just for today,” he says. 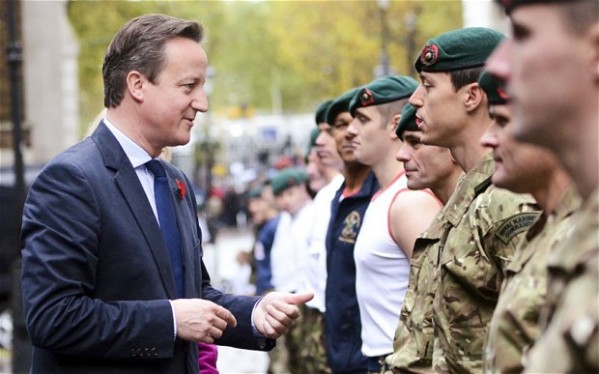 Photo by Steve Back. From http://www.telegraph.co.uk

The trouble is, does he remember? Does the nation remember? And what was the purpose of remembering? Was it not to remember the horrors and devastation of war? Was it not to celebrate the signing of the armistice? Was it not to learn from past mistakes, to ensure that present and future generations would never have to go through what our ancestors went through? If Britain’s leaders truly remember, why are they still so committed to militarism? Why have they spent £2 billion developing military drones over the past five years, with plans to spend a further £2 billion, while public services are being mercilessly cut? Why are British arms being sold to support Middle Eastern dictatorships? Why do soldiers continue to kill and be killed in needless wars in Afghanistan?

Or is it simply a sentimental, condescending pat on the head of the fallen and their relatives, a continuation of the glorification of war and violence as a way of resolving disputes? Through the rhetoric of honour and glory, they obscure the horrors and realities of war, and insist on creating new fallen heroes, even as they mourn the old ones.

It is worth bearing in mind that, as Laurie Penny points out, “not all of [the soldiers in the first and second world wars] bled willingly, for king and country; some of them simply bled because they had been seriously injured, because their leaders deemed it appropriate for them to die in pain and terror.” For government to talk reverently of “sacrifice” is to hijack the grief of veterans and their relatives to further their own jingoistic propaganda aims.

Despite a decrease in violence over the centuries, we are still in a society that is obsessed with the idea that ‘might is right’.  Our national leaders pin poppies to their suits, bow their heads and mourn the fallen, while their hands drip with the blood of all the soldiers and civilians that they have slain, and will continue to slay.