The disrespect that The Sun has shown towards Steenkamp is maddening, and it is far from the only offender. In publication after publication, she is portrayed as no more than a sex object, something to titillate their readership as they read about the main focus of the articles— the downfall of a world-famous athlete. The trial has not yet begun, but already excuses for Pistorius have come thick and fast. ‘Oscar was such a nice man, and not violent at all!’ Never mind that the South African police had confirmed that they had been called to Pistorius’ address before to deal with ‘domestic incidents’. Excuses for violent men…now haven’t we seen this all before?

Of course, the chasm between the focus on Pistorius and Steenkamp in the media and public conversation is partly attributable to their differing levels of fame. Yet, when one looks at the wider picture, it fits into the same old pattern of reporting on gendered violence. It is the male perpetrator’s psyche we fixate on, and his tragedy that we buy into. The female victim is simply a symptom of his downfall, easily replaceable.

What so many news outlets seem to forget is that Reeva Steenkamp is the hero of her own story. Her identity is not ‘Oscar Pistorius’ girlfriend’, nor is it ‘his victim’. She was a model, a law graduate who was about to pursue a legal career, and an advocate against sexual abuse and domestic violence in South Africa. And to her family and friends, she was much, much more. 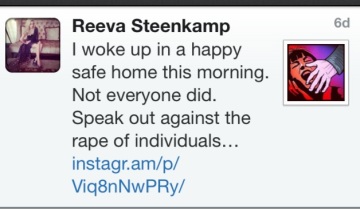 “a very inspiring individual, very passionate about speaking about women and empowerment.”

“She was a lovely girl and her career was just taking off. She had a big heart and was at the forefront of many pro bono projects. She wouldn’t hurt a fly. It’s a tragic loss.”

“I’ve known Reeva for years and she was an incredible, beautiful soul. It’s shocking. An amazing girl has gone too soon.”

So instead of sensationalizing Pistorius, let us grieve for Reeva. And let’s not allow her support for women to have been in vain. 1 in 4 South African women are survivors of domestic violence, and everyday, 3 are killed by their partners. Reeva Steenkamp cared about this. Shouldn’t we?